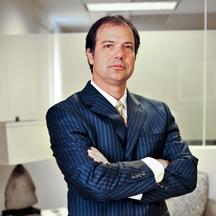 Mr. Vincent Calderone, the founder of Calderone Law Firm, is an experienced trial attorney with over twenty years of protecting the rights of employees. At the Calderone Law Firm, we are dedicated to providing high quality legal representation with outstanding personal service. We thoroughly research all legal issues and meticulously prepare for every meeting, motion, hearing or trial. Once we have a clear understanding of the law and of our clients’ objectives, we zealously represent our clients’ interests.

We offer free initial consultations, and accept employees' cases on a contingent fee basis - this means that we collect no attorney's fees until we reach a favorable settlement or win at trial. We also offer evening and weekend appointments for your convenience.

Mr. Calderone has extensive experience in all aspects of employment litigation and has tried numerous cases to successful jury verdicts. He has represented both employers and employees in all types of employment litigation, including class actions, sexual harassment, wage and hour violations, discrimination on the basis of sex, race, age, religion, disability, pregnancy, and sexual orientation as well as claims for retaliation and wrongful termination. Mr. Calderone also regularly provides advice and counsel concerning employment disputes including issues involving the separation of employees from the workplace, trade secret concerns, and the negotiations of severance arrangements.

Mr. Calderone has received excellent results on behalf of employees in lawsuits against Fortune 50 companies. Mr. Calderone has received multi-million dollar recoveries for multiple clients arising from discrimination and harassment claims against some of California's largest employers. Mr. Calderone also has extensive experience defending employers in virtually all aspect of employment litigation. In addition to his employment law practice, Mr. Calderone also handles a variety of commercial law disputes including, but not limited to, claims involving alleged misappropriation of trade secrets, commercial breach of contract, unfair competition ,land disputes, and interference with contractual relation claims.

Mr. Calderone has also been appointed class counsel by a federal court to represent over ten thousand California employees in a class action lawsuit against Panda Restaurant, Inc. and Panda Express restaurants. Mr. Calderone has also successfully tried a class action lawsuit in federal court on behalf of one thousand aggrieved employees to a favorable judgment.

Mr. Calderone received his Juris doctorate from Villanova University in June 1992 and a Business Degree from California State University Dominguez Hills in 1985. Mr. Calderone is a member of the California Bar and practices before state and federal agencies and state and federal courts. He is also a member of the Los Angeles County Bar Association, Consumer Attorneys Association of Los Angeles, and California Employment Lawyer's Association. He is a former restaurateur and an avid runner including running a near four minute mile in his college days.

100% of Practice Devoted to Litigation